As foreshadowed by last Monday’s 24-hour green picture, the entire week behind us turned green, with the combined moving 7-day average crypto market sentiment score (sentscore) for the top 10 coins by market capitalization reaching the positive 6 today, as shown by crypto market sentiment analysis service Omenics. A week ago, this sentscore was 5.37/10, following a couple of smaller increases towards the positive zone.

That’s far from all good news, as a whopping five coins – half of the list – entered the positive zone as well. Bitcoin (BTC) is still leading the list, but it too made a major jump from the somewhat positive 6.8 a week ago to the very positive 7.6 today. It’s followed by ethereum (ETH), cardano (ADA), tether (USDT), and litecoin (LTC), respectively.

From the remaining five, four are relatively near to the positive zone as well, boasting sentscores between 5.6 and 5.8. EOS is the only one with a score below 5, but it too has had an increase over the past seven days.

As a matter of fact, all ten coins have seen increases in their scores, with chainlink (LINK) leading the list, having gone up 31%, followed by bitcoin cash (BCH)’s 27%. EOS, with a sentscore increase of 1.5%, is in the last place this week. 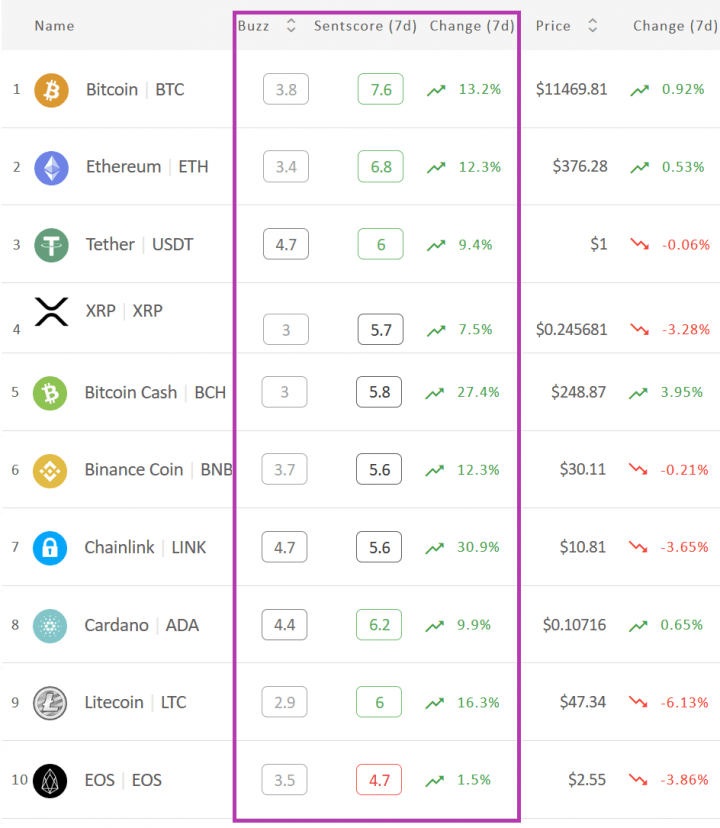 But, it remains to be seen how long the overall sentscore will stay in the positive zone. If the combined moving average sentscore for the top 10 coins in the last 24 hours is any indication, not very long. This sentscore went from 6.11 recorded last Monday to 5.68 today. There are only three coins in the positive zone – bitcoin, ethereum, and cardano; EOS is still the only one with a grade below 5, but very close to the negative zone now; and though a small majority has seen an increase compared to the 24-hour period before, all coins have lower sentscores than their 7-day counterparts.

Daily Bitcoin sentscore change in the past month: 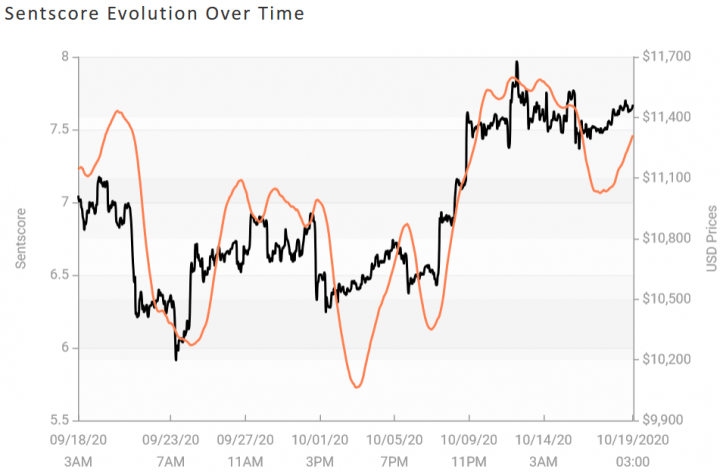 Omenics rates 29 other coins, besides this top 10 list. Only five among these have seen a drop in their sentscores in the past seven days. Nonetheless, major changes are not noticeable. Compared to a week ago, most coins still have scores below 5; the only one in the positive zone is monero (XMR), now with a rise to 6.1; and the only coin in the negative zone is komodo (KMD), down from last week’s two.

The famous investor picks Netflix among major companies as the most likely to put Bitcoin on its balance sheet. Netflix may just be the next...
Read more
Blockchain News

Robotics may be the deepest Machine Learning of all

A few stories to boost your data analytics strategy