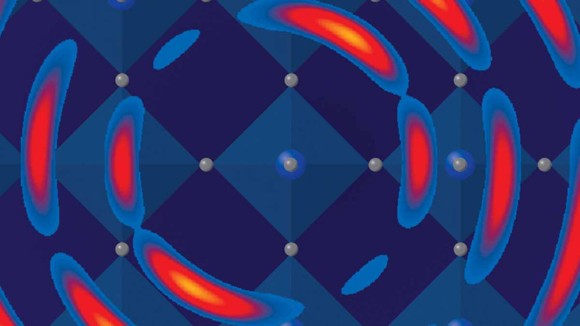 Electrons and their behavior are fascinating to quantum physicists, and recent advances in sources, instruments, and facilities let researchers potentially access even more of the data encoded in quantum materials.

However, these research breakthroughs are generating previously unfathomable volumes of data.

The size of the information in a piece of material can swiftly outpace the total information size in the Library of Congress, which is roughly 20 terabytes, said Eun-Ah Kim, a professor of physics in the College of Arts and Sciences who is spearheading both quantum materials research and using machine learning to analyze data from quantum material experiments.

A team led by Kim successfully utilized a machine learning technique established with Cornell computer scientists to analyze enormous amounts of data from the quantum metal Cd2Re2O7, resolving a debate about the material and laying the groundwork for future machine learning-aided insight into new aspects of the matter.

The paper, titled “Harnessing Interpretable and Unsupervised Machine Learning to Address Big Data from Modern X-ray Diffraction,” was published in the Proceedings of the National Academy of Sciences on June 9th.

We utilized unsupervised machine learning algorithms, which are suitable for translating high-dimensional data into clusters that are reasonable to humans, said Kilian Weinberger, a computer science professor at Cornell’s Ann. S Bowers College of Computing and Information Science.

The researchers identified significant insights into electron behavior in the material as a result of this analysis, uncovering what is known as the pseudo-Goldstone mode. They were pursuing to comprehend how atoms and electrons methodically arrange themselves in order to enhance interaction within the astronomically enormous “community” of electrons and atoms.

In complex crystalline materials, a particular structure of multiple atoms, the unit cell, replicates itself in a systematic arrangement, similar to that of a high-rise apartment complex, Kim explained. We discovered that the repositioning occurs at the scale of every apartment unit, across the entire complex.

She claims that because the arrangement of the units remains constant, it is difficult to identify this repositioning from the outside. However, the repositioning breaks a continuous symmetry almost instinctively, resulting in a pseudo-Goldstone mode.

The existence of pseudo-Goldstone mode can divulge the system’s secret symmetries that would otherwise be difficult to see, Kim explained. X-TEC enabled our discovery.

According to Kim, this discovery is significant for three reasons. First, it demonstrates how machine learning can be used to analyze large amounts of X-ray powder diffraction (XRD) data, serving as a model for X-TEC applications as they scale up. X-TEC will be integrated into the synchrotron as an analysis tool at the Advanced Photon Source and the Cornell High Energy Synchrotron Source and will be available to researchers as a software package.

Second, the discovery ends a debate about the physics of Cd2Re2O7.

As far as we can tell, this is the first example of a Goldstone mode being detected using XRD, Kim said. This atomic-scale insight into variations in a complex quantum material is just the first example to answer key scientific questions that accompany the discovery of new aspects of matter… using data-rich ample diffraction data.

Third, the discovery demonstrates the power of collaboration between physicists and computer scientists.

The mathematical inner workings of machine-learning algorithms are frequently similar to models in physics, but applied to high-dimensional data, Weinberger explained. Because physicists are so good at modeling the natural world, working with them is a lot of fun. They truly hit the ground running when it comes to data modeling.