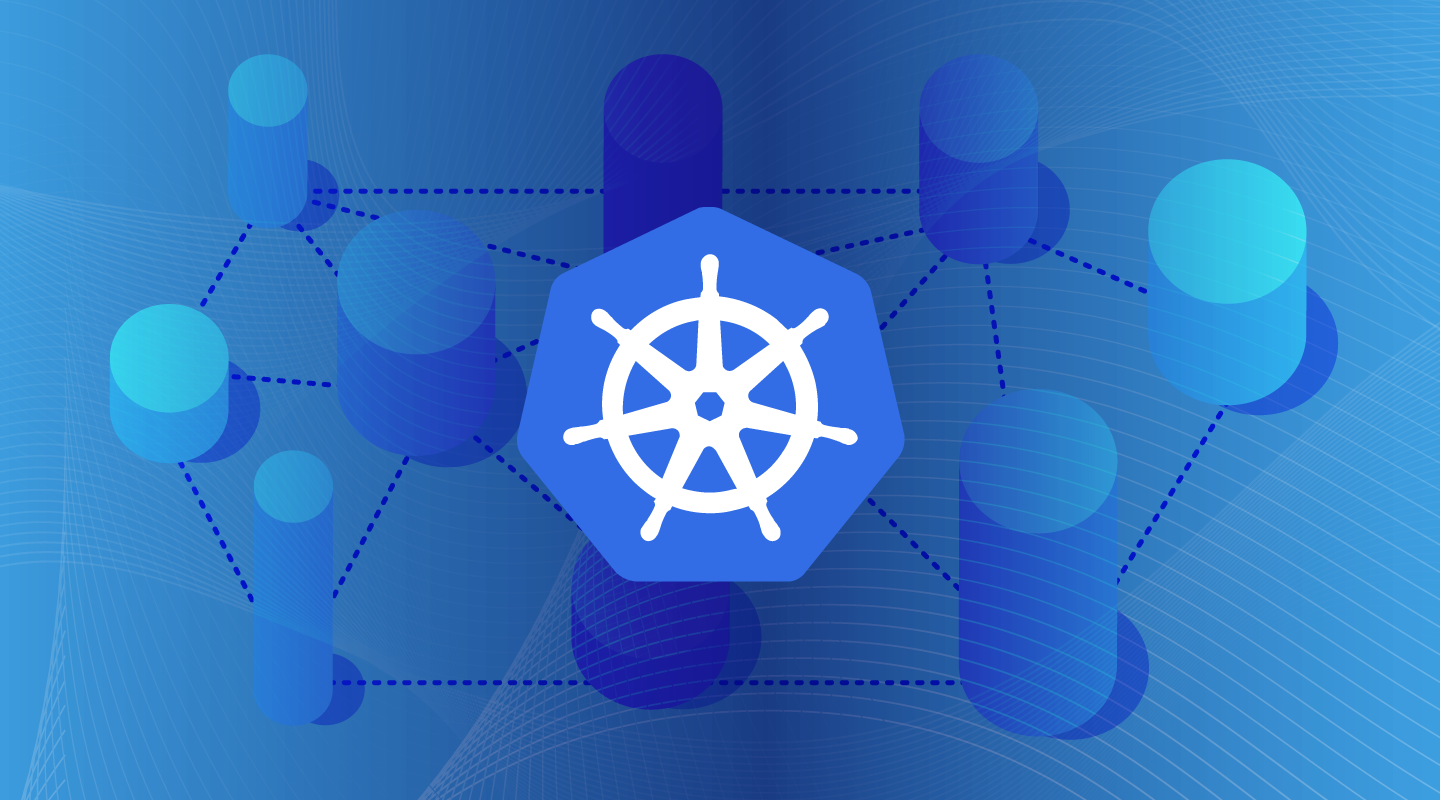 You probably already heard of Kubernetes, a powerful orchestrator that will ease deployment and automatically manage your applications on a set of machines, called a Cluster.

With great power comes great complexity, even in the eyes of Google. Thus, learning Kubernetes is oftentimes considered as cumbersome and complex, namely because of the number of new concepts you have to learn. On the other hand, those very same concepts can be found in other orchestrators. As a result, mastering them will ease your onboarding on other orchestrators, such as Docker Swarm.

The aim of this article is to explain the most used concepts of Kubernetes relying on basic system administration concepts, then use some of these to deploy a simple web server and showcase the interactions between the different resources. Lastly, I will lay out the usual CLI interactions while working with Kubernetes.

This article mainly focuses on the developer side of a Kubernetes cluster, but I will leave some resources about cluster administration at the end.

The Kubernetes realm is the cluster, everything needed is contained within this cluster. Inside it, you will find two types of nodes: the Control Plane and the Worker Nodes.

The control plane is a centralized set of processes that manages the cluster resources, load balance, health, and more. A Kubernetes cluster usually has multiple controller nodes for availability and load balancing purposes. As a developer, you will most likely interact through the API gateway for interactions.

The worker node is any kind of host running a local Kubernetes agent Kubelet and a communication process Kube-Proxy. The former handles the operations commanded by the control plane on the local container runtime (e.g. docker), while the latter redirects connectivity to the right pods.

After some time, a Kubernetes cluster may become huge and heavily used.
In order to keep things well organized, Kubernetes created the concept of Namespace. A namespace is basically a virtual cluster inside the actual cluster.

Most of the resources will be contained inside a namespace, thus unaware of resources from other namespaces. Only a few kinds of resources are completely agnostic of namespaces, and they define computational power or storage sources (i.e. Nodes and PersistentVolumes). However, access to those can be limited by namespace using Quotas.

Namespace-aware resources will always be contained in a namespace as Kubernetes creates and uses a namespace named default if nothing is specified. 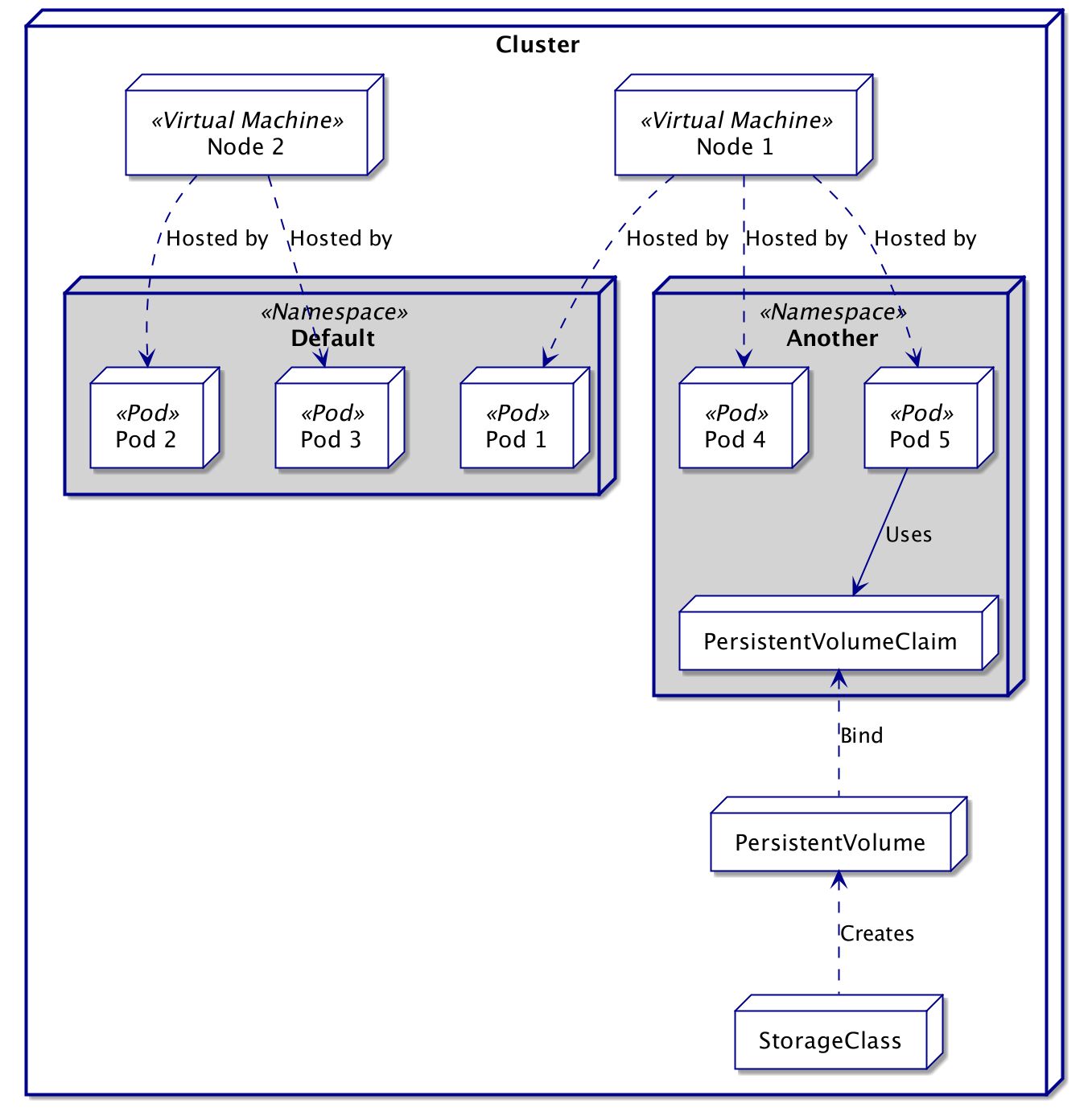 There is no silver bullet on the way to use namespaces, as it widely depends on your organization and needs. However, we can note some usual namespaces usages:

Kubernetes did a great work of remaining agnostic of any technology in their design. This means two things: they can handle multiple technologies under the hood and there is a whole new terminology to learn.

Fortunately, these concepts are pretty straightforward and can most of the time be compared to a unit element of classic system infrastructure. The table below will summarize the binding of the most basic concepts. The comparison might not be a hundred per cent accurate but rather here to help understand the need behind each concept.

The resources in Kubernetes are created in a declarative fashion, and while it is possible to configure your application deployment through the command line, a good practice is to keep track of the resource definitions in a versioned environment. Sometimes named GitOps, this practice is not only applicable for Kubernetes but widely applied for delivery systems, backed up by the DevOps movement.

To this effect, Kubernetes proposes a YAML representation of the resource declaration, and its structure can be summarized as follow:

Watch out: some resources such as StorageClass do no use a single entry point as described above

The metadata entry is critical while creating any resource as it will enable Kubernetes and yourself to easily identify and select the resource.

In this entry, you will define a

), thanks to which the control plane will automatically be able to tell if the file is a new addition to the cluster or the revision of a previously loaded file.

On top of those elements, you can define a

section. It is composed of a set of key-value pairs to narrow down the context and content of your resource. Those labels can later be used in almost any CLI commands through Selectors. As those entries are not used in the core behavior of Kubernetes, you can use any name you want, even if Kubernetes defines some best practices recommendations.

Finally, you can also create an

section, which is almost identical to

but not used by Kubernetes at all. Those can be used on the applicative side to trigger behaviors or simply add data to ease debugging.

Those files define key-value mappings that can be used later in other resources. Usually, those resources (i.e. Secrets and ConfigMap) are loaded before anything else, as it is more likely than not that your infrastructure files are dependent on them.

Those files define the infrastructure to deploy on the cluster, potentially using content from the data files.

In this section, we will take a closer look at the configuration of the most used resources on a Kubernetes application. This is also the occasion to showcase the interactions between resources.

At the end of the section, we will have a running Nginx server and will be able to contact the server from outside the cluster. The following diagram summarizes the intended state: 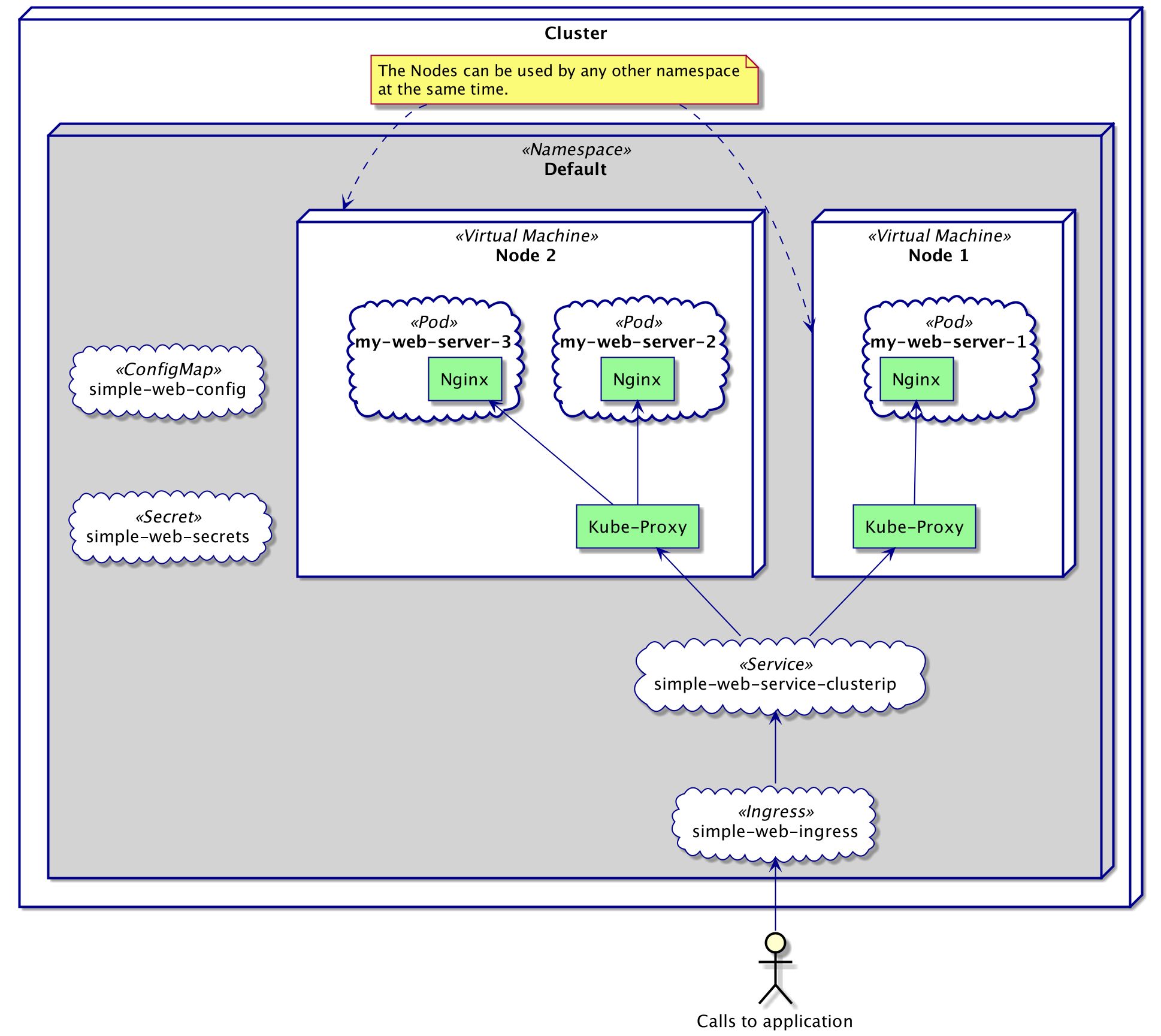 ConfigMap is used to hold properties that can be used later in your resources.

The configuration defined above can then be selected from another resource definition with the following snippet:

Note: ConfigMaps are only available in the namespace in which they are defined.

All sensitive data should be put in Secret files (e.g. API keys, passphrases, …). By default, the data is simply held as base64 encoded values without encryption. However, Kubernetes proposes ways of mitigating leakage risks by integrating a Role-Based Access Control or encrypting secrets.

The Secret file defines a

key at its root, which can be used to add validation on the keys declared in the

entry. By default, the type is set to

which does not validate the entries at all.

The secret defined above can then be selected from another resource definition with the following snippet:

Note: Secrets are only available in the namespace in which they are defined.

A Pod definition file is pretty straightforward but can become pretty big due to the quantity of configuration available. The

fields are the only mandatory ones, but you might commonly use:

Pods are usually not created as standalone resources on Kubernetes,
as the best practice indicates to use pod as part of a higher-level definition
(e.g. Deployment). In those cases, the Pod file’s content will simply be embedded in the other resource’s file.

Note: Pods are only available in the namespace in which they are defined.

The Deployment is generally used as the atomic working unit since it will automatically:

The following file requests 3 instances of an Nginx server running at all times. The file may look a bit heavy, but most of it is the Pod definition copied from above.

Note: Deployments are only available in the namespace in which they are defined.

A pod might be deleted and recreated at any time. When it occurs the pod’s IP address will change, which could result in a loss of connection if you are directly contacting it. To solve this issue, a Service provides a stable contact point to a set of Pods, while remaining agnostic of their state and configuration.

Usually, Pods are chosen to be part of a Service through a

entry, thus based on its

. A Pod is selected if and only if all the labels in the selector are worn by the pod.

There are three types of services that are acting quite differently, among which you can select using the type entry.

The ClusterIP service is bound to an internal IP from the cluster, hence only internally reachable. This is the type of service created by default and is suitable for binding different applications inside the same cluster.

A NodePort service will bind a port (by default in range 30000 to 32767) on the nodes hosting the selected pods. This enables you to contact the service directly through the node IP. That also means that your service will be as accessible as the virtual or physical machines hosting those pods.

Note: Using NodePort can pose security risks, as it enables a direct connection from outside the cluster.

This is an easy way to expose your service but can end up being costly as each service will be managed by a single load balancer.

If you are setting up your own Ingress as we will do here, you may want to use a

service, as other services are made for specific use cases.

Note: Services are defined in a namespace but can be contacted from other namespaces.

Ingress enables you to publish internal services without necessarily using a load balancer from cloud service providers. You usually need only one ingress per namespace, where you can bind as many routing

as you want. A backend will typically be an internally routed ClusterIP service.

Please note that Kubernetes does not handle ingress resources by itself and relies on third-party implementations. As a result, you will have to choose and install an Ingress Controller before using any ingress resource. On the other hand, it makes the ingress resource customizable depending on the needs of your cluster.

Note: Ingresses are defined in the namespace but may contact services from other namespaces and are publicly accessible outside the cluster.

This section showcases the basic CLI commands to manipulate resources. As said before, while it is possible to manually manage resources, a better practice is to use files.

To ease resources manipulations through files, you can reduce the interactions to the CLI to the two following commands:

You can see all resources running through the CLI using

. This command is pretty powerful and lets you filter the kind of resources to display or select the resources you want to see

Note: if not specified, Kubernetes will work on the

namespace. You can specify

to work on a specific namespace or

to show every namespace.

Dig into a particular resource

This section will show you how to dig into resources. Most of the required day-to-day operations are doable through the three following commands.

The first command will give you the resource’s complete configuration, using

Another important command is

, as you might expect it shows you the resources’ logs if applicable. As the logs are produced by Pods, running such a command on a resource above a Pod will dig through Kubernetes to display the logs of a randomly chosen Pod underneath it.

Finally, it is sometimes useful to connect on a pod, you can do so with the command

. This will open an interactive shell on the pod, enabling you to interact with its content.

During this article, we saw the fundamentals behind deploying and publishing stateless services using Kubernetes. But you can do a lot more complex things with Kubernetes. If you want to learn more about it, I can recommend you to look at these resources:

Incidentally, there are multiple subjects I could not deeply talk about in this article and that may be of interest.

On the developer side:

On the cluster administrator side: