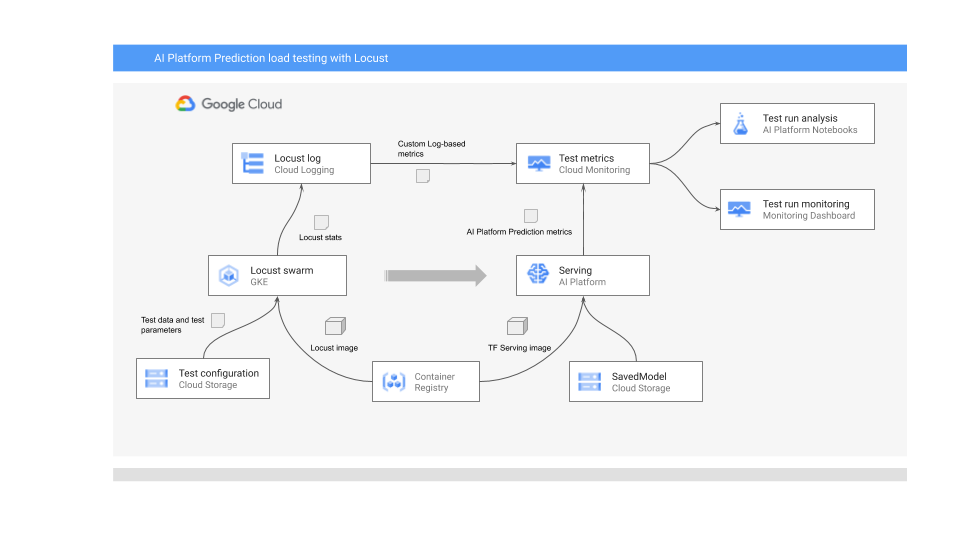 This document shows you how to test and monitor the online serving performance of machine learning (ML) models that are deployed to AI Platform Prediction. The document uses Locust, an open-source tool for load testing.

The document is for data scientists and MLOps engineers who want to monitor the service workload, latency, and resource utilization of their ML models in production. For general information about optimizing performance, see Best practices for performance and cost optimization for machine learning.

The document assumes that you have some experience with Google Cloud, TensorFlow, AI Platform Prediction, Cloud Monitoring, and Jupyter notebooks.

The document is accompanied by a GitHub repository that includes the code and a deployment guide for implementing the system that’s described in this document. The tasks are incorporated into Jupyter notebooks.

The notebooks that you work with in this document use the following billable components of Google Cloud:

To generate a cost estimate based on your projected usage, use the pricing calculator.

The following diagram shows the system architecture for deploying the ML model for online prediction, running the load test, and collecting and analyzing the metrics for ML model serving performance.

The diagram shows the following flow:

The Jupyter notebooks for this scenario

All the tasks for preparing and deploying the model, running the Locust test, and collecting and analyzing the test results are coded in the following Jupyter notebooks. To perform the tasks, you run the sequence of cells in each notebook.

As described in the README.md file of the associated GitHub repository, you need to perform the following steps to prepare the environment to run the notebooks:

To go through the tasks for the scenario, you need to open the JupyterLab environment and get the notebooks.

In this section, you set variables in the notebooks with values that are specific to your context, and you prepare the environment to run the code for the scenario.

The following sections highlight key parts of the process and explain aspects of the design and of the code.

Serving the model for online prediction

The ML model that’s used in this document uses the pretrained ResNet V2 101 image classification model from TensorFlow Hub. However, you can adapt the system design patterns and techniques from this document to other domains and to other types of models.

The code for preparing and serving the ResNet 101 model is in the 01-prepare-and-deploy.ipynb notebook. You run the cells in the notebook to perform the following tasks:

The next sections in this document provide details about preparing the ResNet model and about deploying it.

Prepare the ResNet model for deployment

In addition, for serving the model, we recommend that you embed the feature-engineering logic into the serving interface. Doing this guarantees the affinity between the preprocessing and the model serving, instead of depending on the client application to preprocess data in the required format. You must also include post-processing in the serving interface, such as converting a class ID to a class label.

To make the ResNet model servable, you need to implement serving signatures that describe the inference methods of the model. Therefore, the notebook code adds two signatures:

The signatures are created in a custom module class. The class is derived from the tf.Module base class that encapsulates the ResNet model. The custom class extends the base class with a method that implements the image preprocessing and output post-processing logic. The default method of the custom module is mapped to the default method of the base ResNet model to maintain the analogous interface. The custom module is exported as a SavedModel that includes the original model, the preprocessing logic, and two serving signatures.

The implementation of the custom module class is shown in the following code snippet:

The following code snippet shows how the model is exported as a SavedModel with the serving signatures that were defined earlier:

When the model is exported as a SavedModel, the following tasks are performed:

The following code snippet from the notebook shows the commands that perform these tasks.

The command creates an n1-standard-8 machine type for the model prediction service along with a nvidia-tesla-p4 GPU accelerator.

After you run the notebook cells that have these commands, you can verify that the model version is deployed by viewing it in the AI Platform Models page of the Cloud Console. The output is similar to the following: 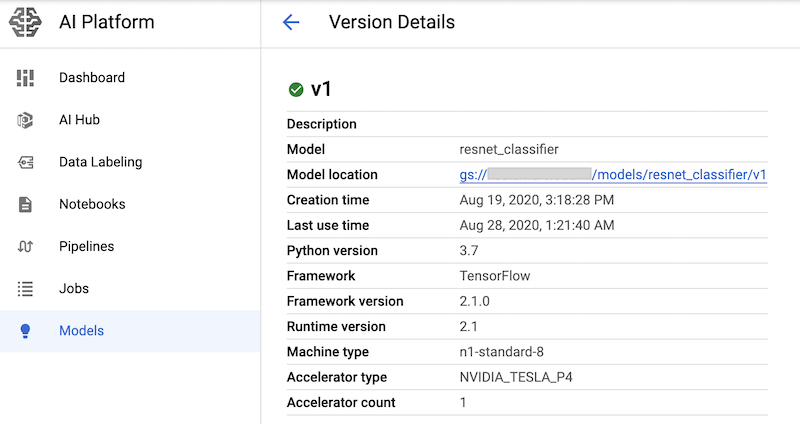 After the model has been set up for serving, you can configure metrics that let you monitor serving performance. The code for configuring the metrics is in the 02-perf-testing.ipynb notebook.

The first part of the 02-perf-testing.ipynb notebook creates custom logs-based metrics in Cloud Monitoring using the Python Cloud Logging SDK. The metrics are based on the log entries that are generated by the Locust task. The log_stats method writes the log entries into a Cloud Logging log named locust.

Each log entry includes a set of key-value pairs in JSON format, as listed in the following table. The metrics are based on the subset of keys from the log entry.

The following code snippet shows the create_locust_metric function in the notebook that creates a custom logs-based metric.

The following code snippet shows how the create_locust_metric method is invoked in the notebook to create the four custom Locust metrics that are shown in the earlier table.

This dashboard and its charts can be created manually. However, the notebook provides a programmatic way to create it by using the monitoring-template.json JSON template. The code uses the DashboardsServiceClient class to load the JSON template and create the dashboard in Cloud Monitoring, as shown in the following code snippet:

After the dashboard is created, you can see it in the list of Cloud Monitoring dashboards in the Cloud Console: 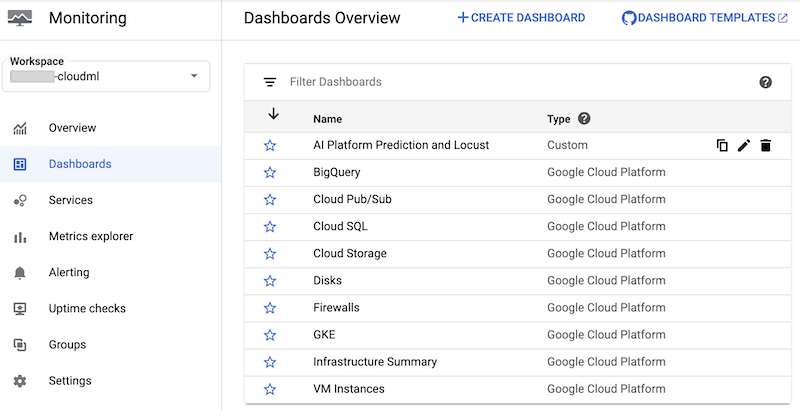 You can click the dashboard to open it and see the charts. Each chart displays a metric either from AI Platform Prediction or from the Locust logs, as shown in the following screenshots.

Note: These screenshots show what the dashboard looks like before you run the notebook cells that perform the tests. Therefore, the charts show no metrics results, and CPU utilization is shown as less than 1%. 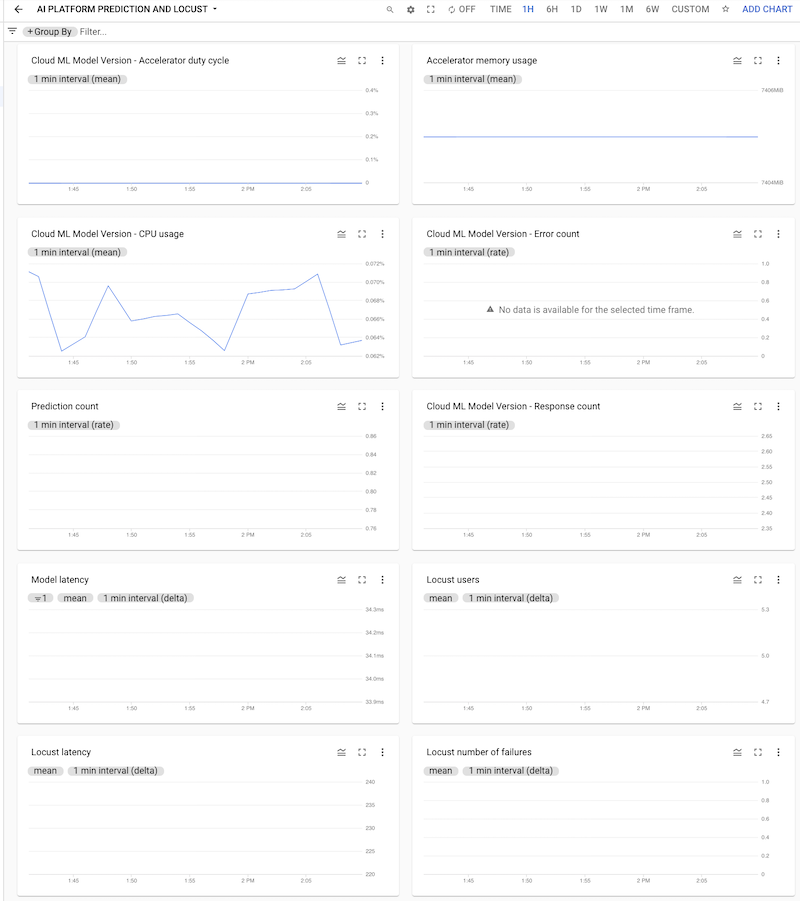 Deploying the Locust test to the GKE cluster

Before you deploy the Locust system to GKE, you need to build the Docker container image that contains the test logic that’s built into the task.py file. The image is derived from the baseline locust.io image and is used for the Locust master and worker Pods.

The logic for building and deploying is in the notebook under 3. Deploying Locust to a GKE cluster. The image is built using the following code:

The deployment process described in the notebook has been defined using Kustomize. The Locust Kustomize deployment manifests define the following files that define components:

In the kustomization.yaml file, do the following:

In the patch.yaml file, do the following:

After you’ve made these changes, you can build your customizations into the Kustomize manifests and apply the Locust deployment (locust-master, locust-worker, and locust-master-service) to the GKE cluster. The following command in the notebook performs these tasks:

You can check the deployed workloads in the Cloud Console. The output is similar to the following:

The test task for Locust is to call the model that’s deployed to AI Platform Prediction.

This task is implemented in the AIPPClient class in the task.py module that’s in the /locust/locust-image/ folder. The following code snippet shows the class implementation.

The code for preparing the test data and test configuration is included in the 02-perf-testing.ipynb notebook under 4. Configure a Locust test.

The test configurations and data instances are used as parameters for the predict method in the AIPPClient class to test the target model using the required test data. The AIPPUser simulates a wait time of 1 to 2 seconds between calls from a single user.

After you run the notebook cells to deploy the Locust workload to the GKE cluster, and after you’ve created and then uploaded the test-config.json and test-payload.json files to Cloud Storage, you can start, stop, and configure a new Locust load test by using its web interface. The code in the notebook retrieves the URL of the external load balancer that exposes the web interface by using the following command:

To perform the test, do the following:

As the test runs, you can monitor the test by examining Locust charts. The following screenshots show how values are displayed.

One chart shows the total number of requests per second:

Another chart shows the response time in milliseconds:

As mentioned earlier, these statistics are also logged to Cloud Logging so that you can create custom Cloud Monitoring logs-based metrics.

Collecting and analyzing the test results

The next task is to collect and analyze the Cloud Monitoring metrics that are computed from the results logs as a pandas DataFrame object so that you can visualize and analyze the results in the notebook. The code to perform this task is in the 03-analyze-results.ipynb notebook.

The code uses the Cloud Monitoring Query Python SDK to filter and retrieve the metric values, given values that are passed in the project_id, test_id, start_time, end_time, model, model_version, and log_name parameters. 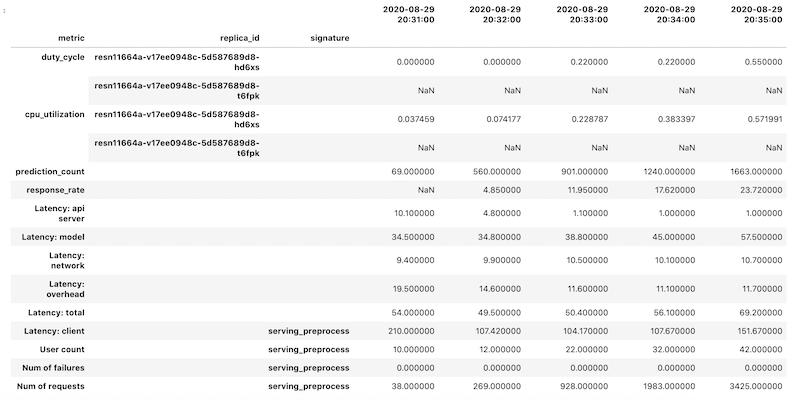 The retrieved DataFrame object uses hierarchical indexing for column names. The reason is that some metrics contain multiple time series. For example, the GPU duty_cycle metric includes a time series of measures for each GPU that’s used in the deployment, indicated as replica_id. The top level of the column index shows the name for an individual metric. The second level is a replica ID. The third level shows the signature of a model. All metrics are aligned on the same timeline. 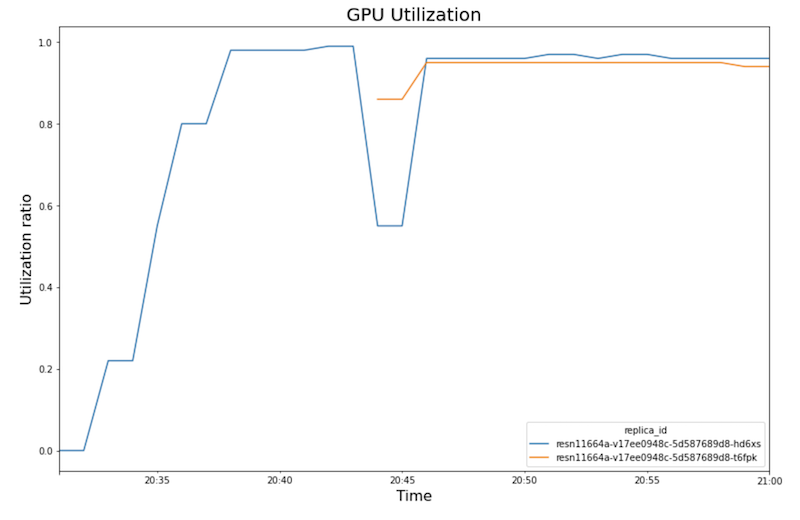 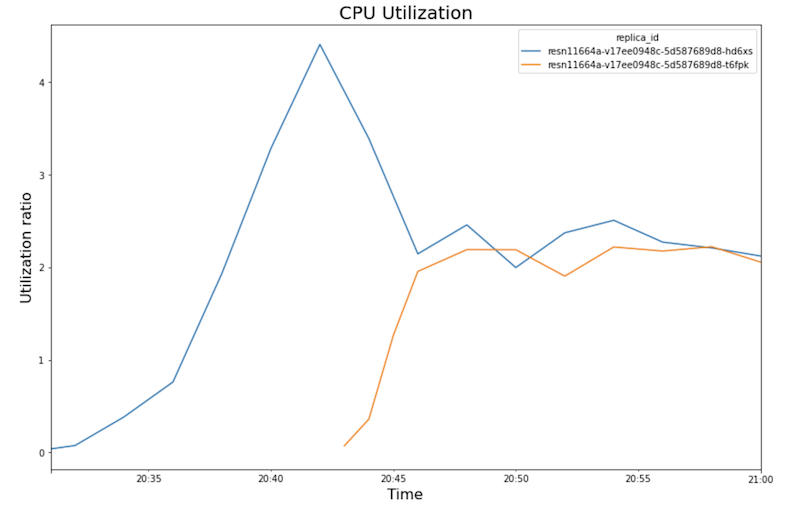 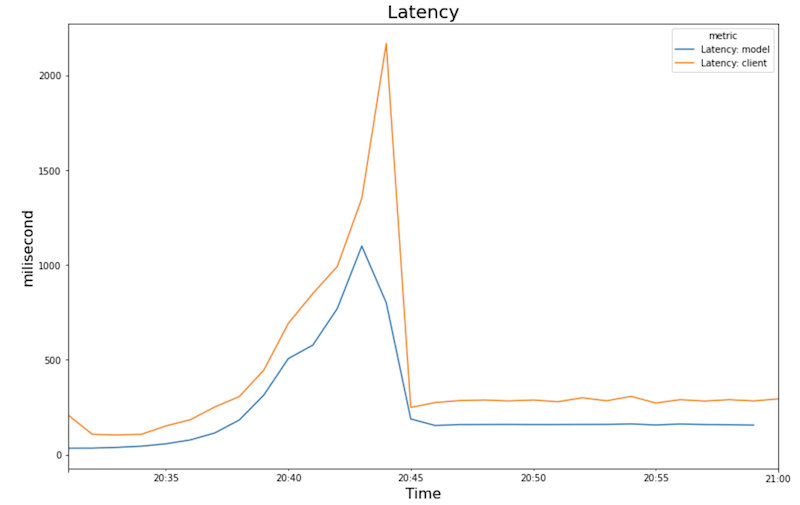 The charts shows the following behavior and sequence:

Caution: Deleting a project has the following effects:

If you want to keep the Cloud project but delete the resources that you created, delete the Google Kubernetes Engine cluster and the deployed AI Platform model.