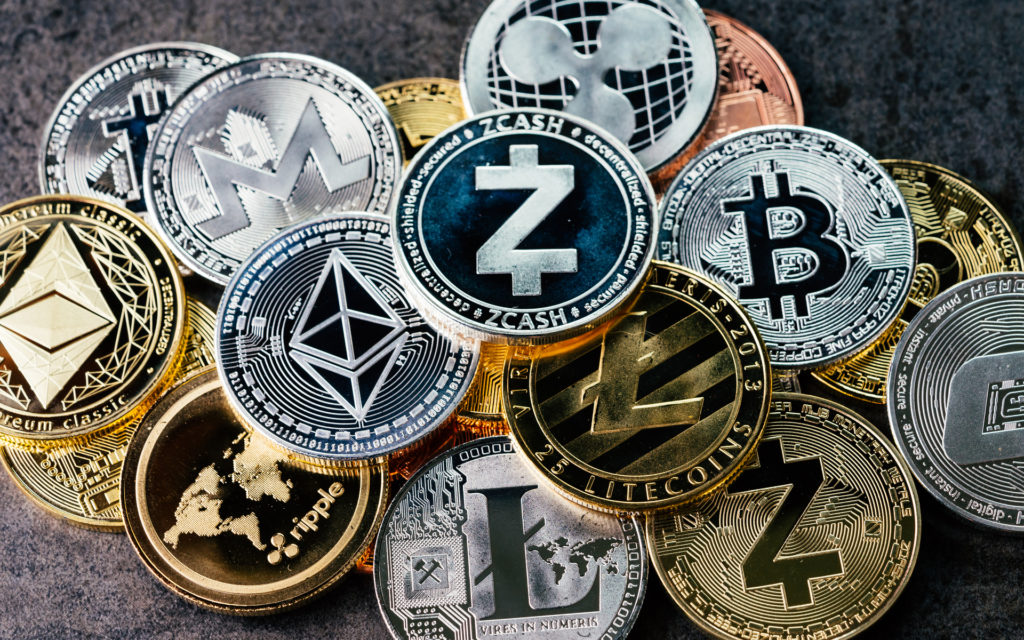 In the proverbial “wild west” of cryptocurrency, Bitcoin established its reputation at the top well before any other types of coins were minted on the blockchain. That left other coins, known as “altcoins,” to get in line.

Since then, thousands of new altcoins, or alternative coins, have been created and added into the crypto ecosystem. “Altcoin” refers to any type of cryptocurrency other than Bitcoin. Ethereum is the most popular altcoin, and people use the full name (Ethereum) when talking about the broader blockchain network but Ether (ETH) to discuss the currency itself.

There are over 15,000 types of cryptocurrencies as of December 2021, according to price-tracking website CoinMarketCap. Bitcoin makes up more than 40% of the total crypto market cap at the time of writing this article, and Ethereum makes up ​​more than 20%. Altcoins occupy the remaining market share (roughly 40%).

That means there are literally thousands of other coins being exchanged out there in the metaverse. Let’s take a closer look at what altcoins are and why experts say most investors should take a pass on anything besides Bitcoin and Ethereum.

Should You Invest In Altcoins?

Experts caution that Bitcoin is highly speculative, and altcoins are even more so. Ethereum, the most widely heard-about altcoin, has grown significantly since its 2015 launch, thanks to its smart contract capabilities and the popularity of digitally scarce art known as non-fungible tokens (NFTs). ETH has a market cap of more than $500 billion at the time of writing this article.

But don’t let the popularity of altcoins result in fear-of-missing-out (FOMO). Even crypto evangelists view the rise of cryptocurrency with some healthy skepticism.

“Everyone always looks at other people making money and they’re like, ‘what about me?’” says Nelson Merchan, CEO of blockchain events firm Light Node Media “But I think that the beauty of what crypto really allows us to do is reassess our relationship with money.”

Don’t view crypto as a fast cash-grab, says Merchan. Instead, see it as an opportunity to learn about a new asset class without putting everything on the line. Before you actually invest in smaller altcoins like Tether, Cardano, and others, start by learning about how they work.

Many experts say crypto is here to stay — especially now that the Biden administration has made clear its desire to regulate it — and blockchain technology continues to hold potential across many different industries.

So while some speculative investors with a high risk tolerance attempt to time the altcoin market and get in while prices are low, experts suggest most investors keep their crypto holdings to under 5% of your portfolio, and stick with the two most well-established coins — Bitcoin and Ethereum. And that’s only if you’ve already built an emergency fund and know crypto investments won’t get in the way of long-term goals like paying down high-interest debt and investing in low-cost index funds.

Don’t change your entire approach overnight. Assess your risk tolerance, time horizon, and financial goals. If you’re interested in crypto but not ready to buy and hold it directly, there are several ways to invest in crypto through passive means without actually buying any coin.

Altcoins can come in many different categories and can even belong to more than one at a time. Experts suggest investing mostly in Bitcoin and Ethereum, since they have the longest track record.

There are a few different ways to categorize altcoins. Some can even be included in more than one category. Due to how new cryptocurrency is in general, the categories are ever-evolving.

Here are some of the current major buckets altcoins can fall into:

Tether is known as the first stablecoin. It is also a popular altcoin used by advanced crypto traders when trading crypto on an exchange, since it offers a way to cut down on fees compared to exchanging U.S. dollars for each transaction. It’s possible that stablecoins will become instrumental in making it easier for everyday consumers to buy things with crypto — a possibility government officials have clearly taken notice of, most recently with a proposal by the Biden administration to more strictly regulate stablecoins.

Named after social media jokes and puns, memecoins are a type of popular altcoin whose value comes from community buy-in more than anything else. Unlike Bitcoin, whose value is more directly connected to fundamentals such as scarcity and total potential market cap, memecoins often hit the crypto ecosystem in mass quantities and get bought up by eager trend-followers and influencers.

Similar to NFTs, crypto insiders say memecoins bring value in the form of online community. And just like the value of NFTs, memcoins commonly rise and fall, with far shorter track records than bigger cryptos like Bitcoin or Ethereum.

“Memecoins and NFTs have a lot of similarities in my opinion,” says Light Node Media president Alexis Johnson. “[The value] is really all about the strength of the community.”

The hype may be why some Gen Z investors get into crypto at all, says 18-year-old crypto influencer Randi Hipper, known as Miss Teen Crypto on social media. When Dogecoin, or “doge” — a popular satire coin based on a viral meme of a Shiba Inu dog — hit the scene in 2013, it was a joke. But this joke was its appeal, and Dogecoin has since risen to a nearly $30 billion market cap. High-profile celebrities like Elon Musk and Snoop Dogg even reportedly own Dogecoin.

“People want to surround themselves with other people that support the same thing,” Hipper says about the psychology behind memecoins.

However popular memecoins are, they are all about timing and having 15 minutes of fame, making them even riskier investments than Bitcoin and other cryptos. Some crypto investors aim to guess which memecoins will stand the test of time, looking for factors other than popularity that could give them lasting value — but it’s mostly speculation. Even the co-creator of Dogecoin has become a critic, noting the potentially harmful influence of social media “get rich quick” trends.

Experts from many different industries have pointed to the big potential of Blockchain technology — the platform upon which all cryptos are coded. Industry professionals inside the crypto world and beyond say blockchain could one day be as ubiquitous as the internet currently is, with some even referring to it as “Web 3.”

With all this new functionality, users need a way to pay for transactions, including fees to publish art, mint tokens, trade services, and receive certain access within any particular blockchain network. Enter utility tokens: a category of altcoin developed for just this kind of functionality.

Ether is perhaps the most versatile utility token, as it lets users pay to mint currencies, digital art, and more on the Ethereum blockchain. Ethereum is known for charging a service fee known as a “gas fee” which covers the cost of the data processing. Another utility token is Filecoin, which is used to purchase space on the Filecoin blockchain network for file storage. Some consider blockchain file storage a new, decentralized version of popular cloud storage platforms like Google Drive.

Governance tokens are a type of utility token that purchases certain voting privileges, such as the ability to participate in blockchain-wide polls. Like the name suggests, governance tokens allow users to vote on decisions that influence blockchain ecosystems. In the world of decentralized finance (DeFi) in which crypto holders perform complex transactions that leverage coins for advanced yields — similar to lending and trading — governance tokens exist because of the democratic ideals of crypto coders, developers, and community members.

However, the complexity of DeFi can be a barrier to most people and contributes to the volatility of crypto in general. Most engage with governance tokens after thoroughly dipping their toe in the more beginner-friendly aspects of crypto.

Much like a regular financial security, a security token is a digital liquid contract representing fractions of a real asset with value, like real estate or a business. Because blockchain records are immutable (they can’t be erased or altered), security tokens are a way to record ownership stake in something.

A fork results in a kind of altcoin that comes from coders making a significant change in a blockchain’s protocol that alters how cryptocurrencies are recorded, traded, and received. There are “soft forks” and “hard forks.” Forks can either tweak the currency slightly, branch off into a new type, or upgrade the blockchain system enough to render old forms of transactions invalid. Forks can happen on any blockchain and may require upgrades across all computer systems (nodes) that keep it running.

Bitcoin Cash is an example of a fork, or a spin-off, of Bitcoin. It was created when a large enough number of Bitcoin stakeholders sought to create a different version of Bitcoin that would be better suited for everyday payments. Though that aim largely failed (Bitcoin Cash is similarly too volatile to make sense for such payments), it currently has a market cap of more than $9 billion.

What Altcoins Are Here to Stay?

It’s hard to say which altcoins could have lasting value, compared to the ones enjoying their moment in the spotlight. A somewhat grave example of crypto’s fleeting value is the recent rise of the Omicron cryptocurrency, which rose in value 1,000% after news of the breakthrough coronavirus variant hit — and then promptly fell by nearly just as much.

In general, altcoin investing isn’t necessary for anyone taking a whole-market and/or passive investing approach. However, if you plan to engage with crypto and learn more about DeFi, you may want to start educating yourself on the types of altcoins and their uses.

Lastly, as blockchain technology becomes more ubiquitous, consider a future in which consumers exchange altcoins for functions like paying for service fees or file storage. Ten years ago, not many predicted we’d be using our cellphones to send digital payments to our friends and family. Likewise, expect crypto tech to continue shaping the way we send, receive, and utilize money — but don’t worry about getting too lost in the hype if you’re more interested in slow and steady long-term investing.