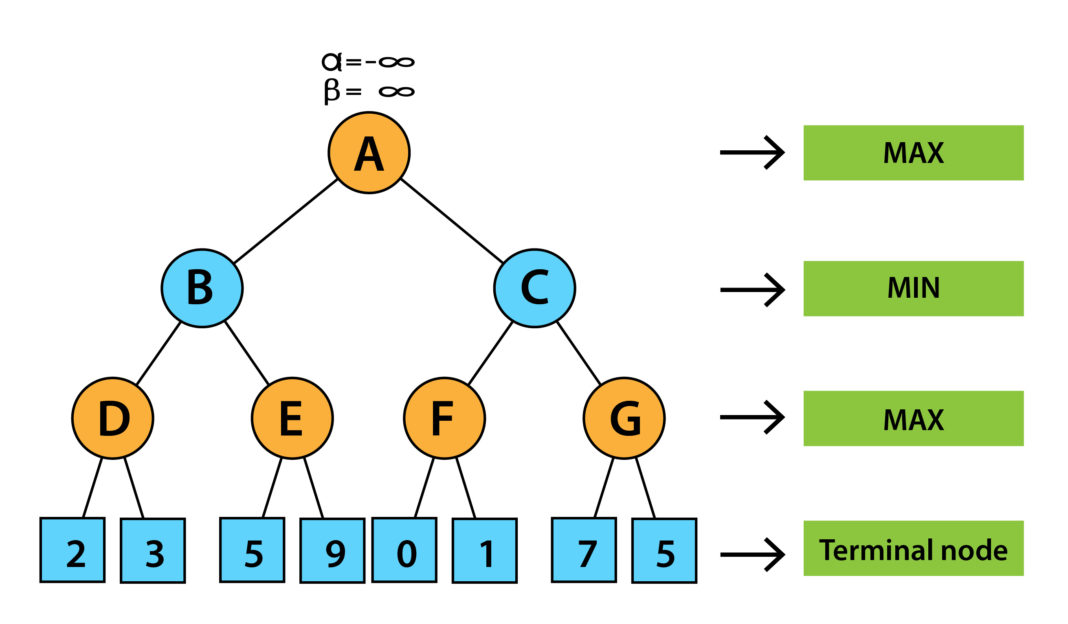 The word ‘pruning’ means cutting down branches and leaves. In data science pruning is a much-used term which refers to post and pre-pruning in decision trees and random forest. Alpha-beta pruning is nothing but the pruning of useless branches in decision trees. This alpha-beta pruning algorithm was discovered independently by researchers in the 1900s.

Alpha-beta pruning is an optimisation technique for the minimax algorithm which is discussed in the next section. The need for pruning came from the fact that in some cases decision trees become very complex. In that tree, some useless branches increase the complexity of the model. So, to avoid this, Alpha-Beta pruning comes to play so that the computer does not have to look at the entire tree. These unusual nodes make the algorithm slow. Hence by removing these nodes algorithm becomes fast.

Minimax is a classic depth-first search technique for a sequential two-player game. The two players are called MAX and MIN. The minimax algorithm is designed for finding the optimal move for MAX, the player at the root node. The search tree is created by recursively expanding all nodes from the root in a depth-first manner until either the end of the game or the maximum search depth is reached. Let us explore this algorithm in detail.

As already mentioned, there are two players in the game, viz- Max and Min. Max plays the first step. Max’s task is to maximise its reward while Min’s task is to minimise Max’s reward, increasing its own reward at the same time. Let’s say Max can take actions a, b, or c. Which one of them will give Max the best reward when the game ends? To answer this question, we need to explore the game tree to a sufficient depth and assume that Min plays optimally to minimise the reward of Max.

Here is an example. Four coins are in a row and each player can pick up one coin or two coins on his/her turn. The player who picks up the last coin wins. Assuming that Max plays first, what move should Max make to win?

If Max picks two coins, then only two coins remain and Min can pick two coins and win. Thus picking up 1 coin shall maximise Max’s reward.

As you might have noticed, the nodes of the tree in the figure below have some values inscribed on them, these are called minimax value. The minimax value of a node is the utility of the node if it is a terminal node.

Now we will discuss the idea behind the alpha beta pruning. If we apply alpha-beta pruning to the standard minimax algorithm it gives the same decision as that of standard algorithm but it prunes or cuts down the nodes that are unusual in decision tree i.e. which are not affecting the final decision made by the algorithm. This will help to avoid the complexity in the interpretation of complex trees.

Now let us discuss the intuition behind this technique. Let us try to find minimax decision in the below tree :

Here in the above result you must have a doubt in your mind that how can we find the maximum from missing value. So, here is solution of your doubt also:

We have reached a decision without looking at those nodes. And this is where alpha-beta pruning comes into the play. 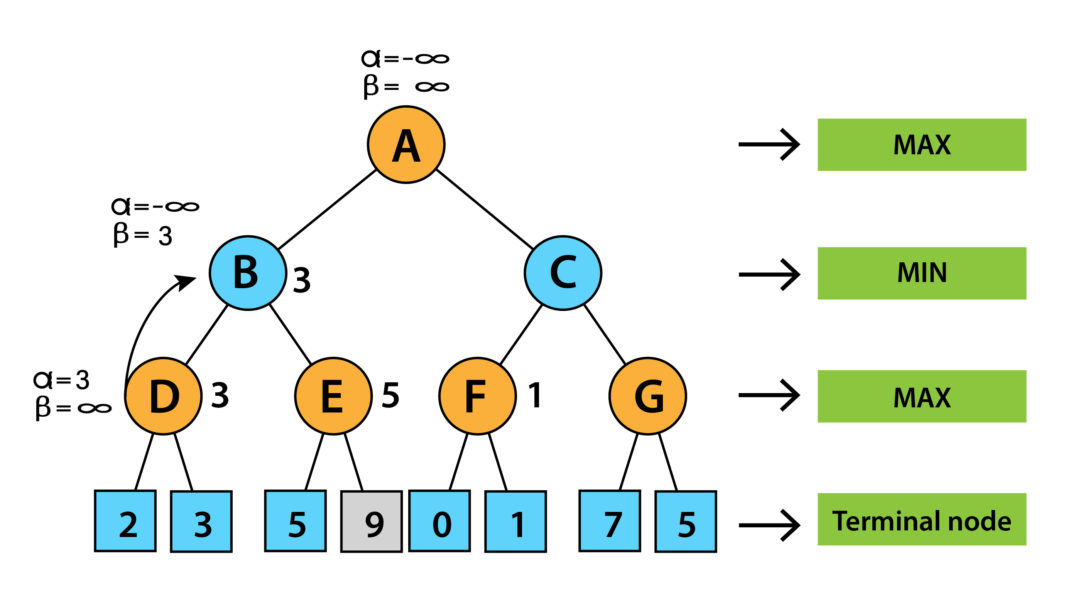 In the next step, algorithms traverse the next successor of Node B which is node E, and the values of α= -∞, and β= 3 will also be passed.

4. Now it’s turn for MAX. So, at node E we will look for MAX. The current value of alpha at E is – ∞ and it will be compared with 5. So, MAX (- ∞, 5) will be 5. So, at node E, alpha = 5, Beta = 5. Now as we can see that alpha is greater than beta which is satisfying the pruning condition so we can prune the right successor of node E and algorithm will not be traversed and the value at node E will be 5. 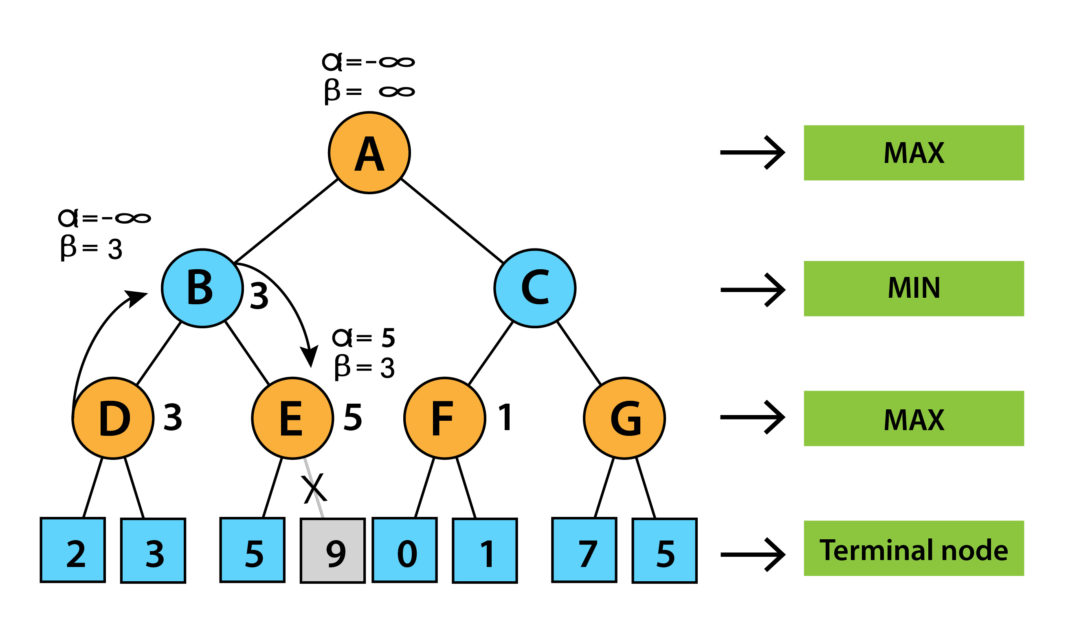 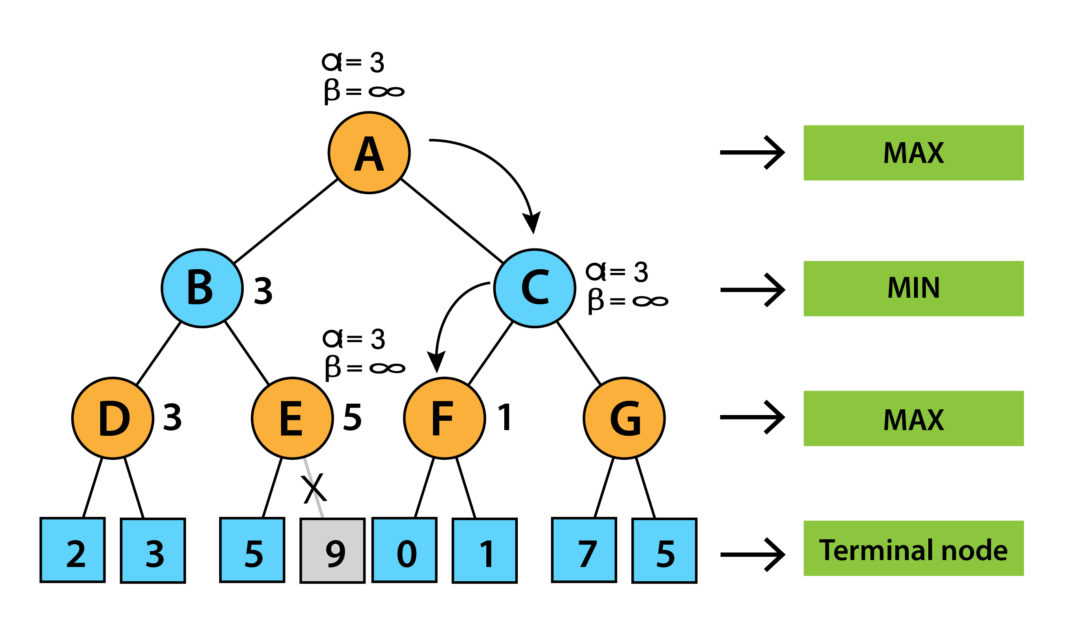 8. Now node F will return the node value 1 to C and will compare to beta value at C. Now its turn for MIN. So, MIN (+ ∞, 1) will be 1. Now at node C, α= 3, and β= 1 and alpha is greater than beta which again satisfies the pruning condition. So, the next successor of node C i.e. G will be pruned and the algorithm didn’t compute the entire subtree G. 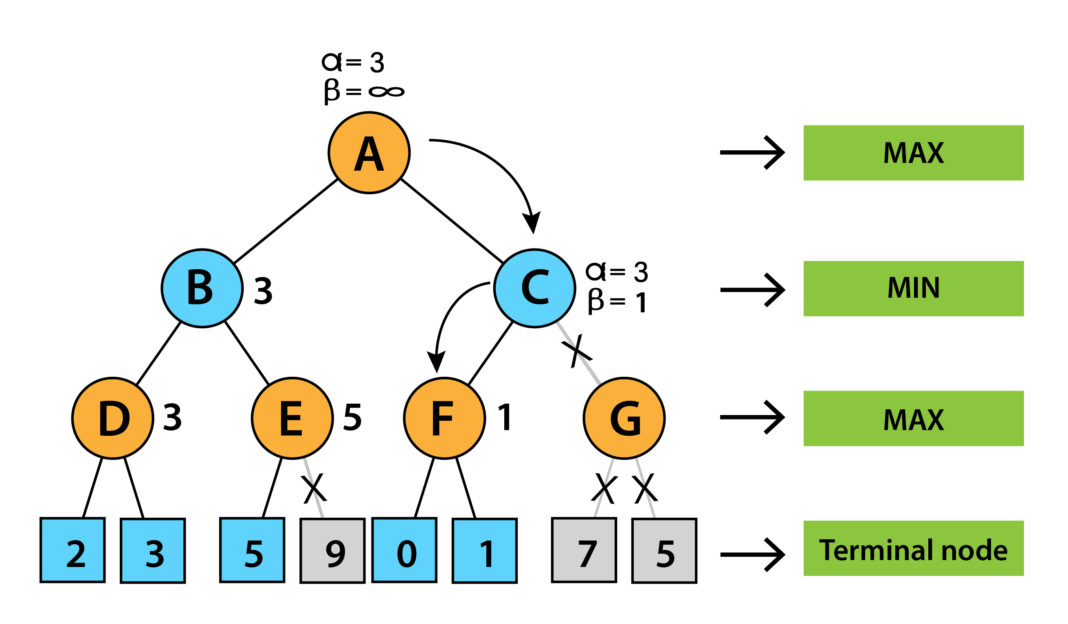 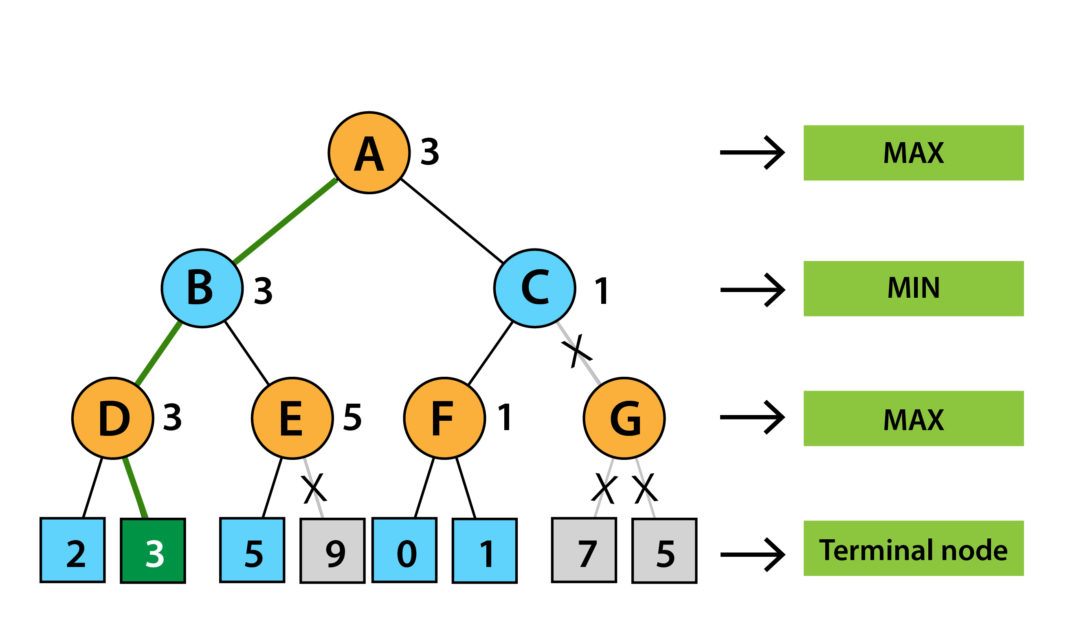 The effectiveness of alpha – beta pruning is based on the order in which node is examined. Move ordering plays an important role in alpha beta pruning.

There are two types of move ordering in Alpha beta pruning:

In this document we have seen an important component of game theory. Although the minimax algorithm’s performance is good but the algorithm is slow. So to make it fast we use alpha-beta pruning algorithm which will cut down the unusual nodes from the decision tree to improve the performance. Nowadays fast and well-performed algorithm is widely used.