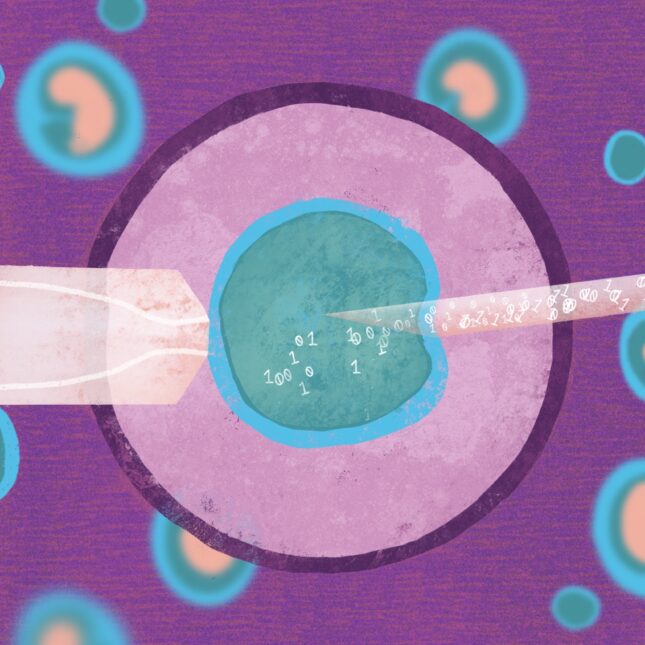 IVF is a physically and emotionally draining process and success isn’t guaranteed. But machine learning technology could improve the odds for couples trying to conceive. Natalie Healey talks to Life Whisperer’s Michelle Perugini to find out more.

Infertility is one of nature’s cruellest tricks. For around one in seven couples, no matter how much they long for a child, the stork never arrives. In-vitro fertilisation (IVF) has helped millions of people achieve their dream of starting a family in the 40 years since its conception. But despite the often eye-watering cost of treatment (not to mention the emotional strain), success is not guaranteed. In 2018, the average birth rate for an IVF embryo in the UK was just 23%. Consequently, many couples undergo fertility treatment multiple times. Each failed cycle is another dashed hope.

Dr Michelle Perugini, co-founder at artificial intelligence (AI) companies Presagen and Life Whisperer, in Adelaide, Australia is more than familiar with the emotional rollercoaster of trying to get pregnant. “I had a lot of trouble conceiving my first child,” she reveals.

In 2016, Perugini, a former stem cell biologist, was a mentor for the Australian eChallenge programme for would-be entrepreneurs. It was there that she met Dr Jonathan Hall, a University of Adelaide physics PhD graduate. Hall believed his machine-learning research could boost the chances of success in IVF. Perugini was instantly intrigued. As was her husband, AI expert Dr Don Perugini. The trio launched the start-up Life Whisperer soon afterwards. Their aim: to eliminate IVF trauma.

AI is already being used in many healthcare settings. At Addenbrooke’s Hospital in Cambridge, UK it can help doctors safely plan radiotherapy for patients with brain cancer. While at Moorfields Eye Hospital in London, machine-learning is used to help diagnose and treat certain eye conditions. However, AI’s role in fertility treatment is less well-explored.

“The fertility sector is quite traditional and hasn’t had as much impact from technology as other healthcare sectors because it’s a very sensitive area and it’s also really difficult to experiment on embryos,” says Perugini.

Even when it works, IVF is an emotionally and physically-taxing procedure. After weeks of hormone injections, a woman’s eggs are extracted and then combined with sperm in a culture dish. Over five days, the eggs develop into embryos. One of these will be implanted into her uterus via the cervix. “At that point, the embryologist has a very difficult decision,” says Perugini.

A major driver of success in IVF is choosing the embryo (at this stage called a blastocyst) that is most likely to lead to a healthy pregnancy. Fertility doctors have to do this manually, by looking down a microscope and making an educated guess, but there could be a better way.

Life Whisperer’s machine-learning algorithm assesses the microscopy images and provides a quality score for each embryo which tells the doctor how likely it is to lead to pregnancy. Perugini says that the cloud-based platform has been trained using tens of thousands of microscopy images from previous IVF cycles.

The tool assesses an embryo’s viability using morphological features that a human eye looking down a microscope isn’t able to differentiate. In a study looking at over 1600 embryos, Life Whisperer was found to be 25% better than an embryologist alone.

“Patients have previously gone through this process with zero transparency around how that decision is conducted,” says Perugini. “There’s not a lot of information, not because of the fault of embryologists but because they’re limited to what they can see with their eyes.”

It’s not the first time AI’s predictive capabilities have been tested for fertility treatment. In January 2020, embryologists at Weill Cornell Medicine in New York found an AI platform developed with computer scientist colleagues was able to correctly guess embryo viability 97% of the time.

While in August 2020, Canadian start-up Future Fertility launched Violet, a cloud-based software that predicts whether an egg can be successfully fertilised. Violet has been shown to be 20% better than embryologists at predicting the likelihood of an egg becoming an embryo once it meets sperm in the culture dish. It could be helpful for women who have had their eggs frozen.

Life Whisperer is being used in fertility clinics in Australia and India and is set to expand into the UK and Europe after receiving CE mark regulatory clearance in June 2020. Perugini says the company is also working on a new AI product which could mark out embryos most at risk of genetic abnormalities. It could be used in countries where pre-implantation genetic screening is banned during fertility treatment.

“Some of our early results show that there’s a very clear association between the physical features that we can detect in the embryo using AI, and the severity of genetic changes,” she says.

AI in IVF sounds promising, though the UK’s Human Fertilisation and Embryo Authority cautions that any potential unintended consequences and ethical ramifications should be determined before it is widely adopted by clinics. Plus, identifying which embryos stand the best chance of survival is only the first hurdle. There are multiple reasons why even the most robust-looking blastocyst doesn’t implant correctly or lead to a healthy pregnancy.

Perugini believes a holistic approach to AI in IVF, where all stages of fertility treatment – from egg and sperm selection, embryo transfer and genetic testing – are taken into account will be favoured by clinics in future. She says: “AI technology that provides a single solution for the whole IVF journey is going to be the most transformative and disruptive player for the sector.”

This article has been published from a wire agency feed without modifications to the text. Only the headline has been changed.
Source link
Facebook
Twitter
Pinterest
WhatsApp
Linkedin
ReddIt
Email
Tumblr
Telegram
Mix
VK
Previous articleMachine Learning a major part of Google Sheets
Next articleUsing Blockchain to manage the supply chain COVID-19 vaccine

Some types of artificial intelligence could start to hallucinate if they don’t get enough rest, just as humans do One of the distinguishing features of...
Read more
- Advertisment -