From interest rates to fashion, pandemics in the past — like the Black Death in the 14th century — have left deep imprints on economic life. This time may be no different. In the aftermath of the coronavirus, governments can reimagine capitalism by giving all of us a stake in the most valuable byproduct of our day-to-day living: data. But make no mistake. It will still be a Faustian bargain.

A global data profit will be a very different GDP from gross domestic product. The case for technology companies to share it with we, the people who supply them the bits and bytes, is compelling. In fact, it could even emerge as a better universal basic income — another revolutionary concept whose time may have come — for the post-Covid world.

A state-provided allowance can improve citizens’ well-being, a widely studied Finnish experiment has shown. Yet only a small group of developed countries would even have a chance of sustaining a meaningful subsidy, provided taxpayers agree. Most developing nations would balk at the expense. Inequality between the global North and South would worsen.

This is where a share of global data profit for the 63% of the world population that’s already online could prove helpful. The FANG quartet — Facebook Inc., Amazon.com Inc., Netflix Inc. and Google parent Alphabet Inc. — garners $140 billion in combined operating earnings. China’s BAT trinity of Baidu Inc., Alibaba Group Holding Ltd. and Tencent Holdings Ltd. hauls in another $50 billion. Throw in device makers like Apple Inc., Samsung Electronics Co. and Xiaomi Corp., payment processors like Visa Inc., Mastercard Inc., and Paypal Holdings Inc., and the available profit pie of our data overlords is at least $350 billion. Their combined revenue is in excess of $1.3 trillion. 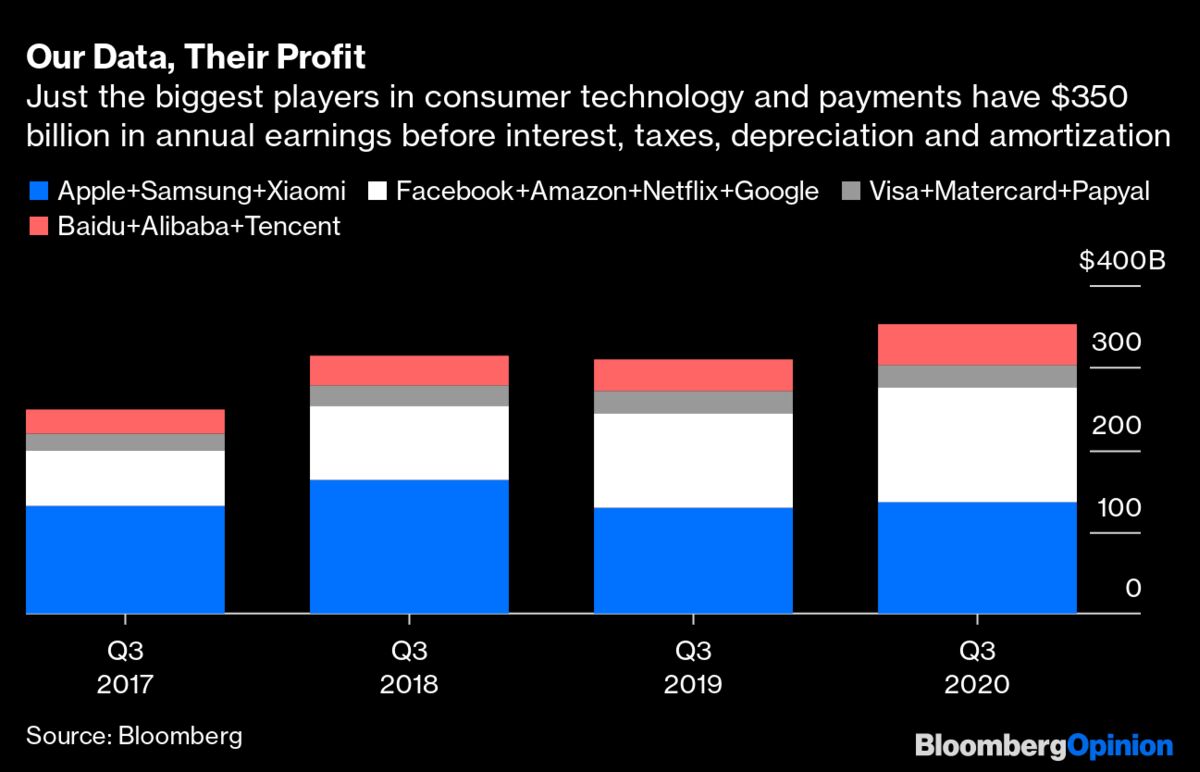 The arrival of 5G telecommunications networks and Internet of Things, plus rapid growth of new-age fintech players like China’s Ant Group Co., India’s Jio Platforms Ltd., and Southeast Asia’s Grab Holdings Ltd. and Gojek, will see the industry’s profit exceed $1 trillion well before the end of the decade. Even now, governments shouldn’t mind tapping companies that for the most part did well out of the pandemic to put some extra money in the hands of citizens left poorer and jaded by it. The problem is that Big Tech is notorious for moving profits to where they’re taxed least. There has to be a better way to take it back from them.

One powerful suggestion has come from Columbia Law School Professor Katharina Pistor. In a recent paper, she argued that it will be useless for us, as information producers, to get authorship rights on our individual raw data. They have very little value. Yet, when algorithms analyze billions of data points, they glean insights about our behavior. Big Tech shares the intelligence for a profit with providers of goods and services, who then use the knowledge to influence our choices as consumers and make a further gain.

Instead of being participants in a free market, this power game makes us victims, twice over.  No notice-and-consent privacy law or antitrust regulation can improve our bargaining position. We need partial ownership not of the data, but the databases. Put another way, if technology has made it our destiny to be “ruled by data,” then we must have rights in a depository trust of data. Pistor explains:

The argument hinges on debunking a popular myth: Our information footprints, the professor says, are not oil, or anything resembling a regular commodity or asset. Beyond seeking protection against hacking, the technology industry hasn’t relied on legal protection to assert its property rights. It has simply captured data as “res nullius,” or wild animals, and enjoyed supernormal profits. It’s time governments ended the ambiguity over ownership, and gave data the status of “res communis,” or community property. This is what a depository achieves.

To be sure, no governments are actually considering this yet. But imagine the shakeup to power in Big Tech and people’s sense of ownership in society if political authorities tried to resolve what University of Westminster sociologist Christian Fuchs sees as a Marxian “antagonism between digital commons and digital commodities.” There are two questions. First, how would the depository pass on pro-rated dividends it receives from harvesters to producers? Second, would China come on board with the plan, or would this profit sharing end up being a permanent drag only on Western tech?

The answers may be interlinked. The last-minute quashing of Ant’s initial public offering and the regulator’s order that the fintech behemoth return to its roots as a payment services provider have been the strongest signal yet of Beijing’s intention to rein in the rising power of its data czars. But that’s not the end of it. Eventually, all major central banks will issue widely distributed digital currencies, emulating an experiment already under way in China. The anonymity of cash will disappear sometime during the decade. It’s conceivable, therefore, that dividends from data depositories could simply hit official digital currency wallets on our mobile phones. In the process of spending, we’ll be leaving a data trail for central banks.

Europe after the Black Death was hit by a wave of “life is short” consumerism. After this year’s trauma, we, too, are yearning for a vaccine and a more carefree 2021. But can we, as producers, consumers, and people, ever be fully rid of the scars? Even if we want to forget, will governments let us drop our guards? The rise of contact tracing during the pandemic has introduced us, willingly or otherwise, to the idea that our smartphones can keep us safe — by spying on us.

Sacrificing some more of our freedom to eternal state surveillance could become a deal with a devil we’re growing to know only too well. We’ll take it, but only if technology gets us a real stake in 21st-century capitalism in return.