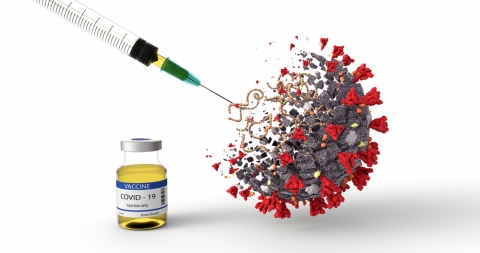 Neural network identifies synergistic drug blends for treating viruses like SARSCoV2. The existential threat of Covid-19 has highlighted an acute need to develop working therapeutics against emerging health concerns. One of the luxuries deep learning has afforded us is the ability to modify the landscape as it unfolds — so long as we can keep up with the viral threat, and access the right data.

As with all new medical maladies, oftentimes the data need time to catch up, and the virus takes no time to slow down, posing a difficult challenge as it can quickly mutate and become resistant to existing drugs.

This led scientists from MIT’s Computer Science and Artificial Intelligence Laboratory (CSAIL) and the Jameel Clinic for Machine Learning in Health to ask: How can we identify the right synergistic drug combinations for the rapidly spreading SARSCoV2?

Typically, data scientists use deep learning to find drug combinations with existing large data sets for things like cancer and cardiovascular disease, but it’s understandable that they can’t be used for new diseases with limited data.

Without the necessary facts and figures, the team needed a new approach: a neural network that wore two hats. Since drug synergies often occur through inhibition of biological targets (such as proteins or nucleic acids), the model jointly studies interactions between drug targets and synergies between drugs to extract new combinations.

The drug target predictor models the interaction between a drug and a set of known biologic targets associated with the selected disease. Target disease association predictors learn to understand the antiviral activity of a drug, which means determining viral yield in infected tissue cultures.

Together, they can predict the synergy of the two drugs.

Two new drug combinations were discovered using this approach: remdesivir (currently FDA-approved for the treatment of Covid19) and reserpine, as well as remdesivir and IQ1S, which have been shown to be effective against viruses in biologic tests.

The study is published in the Proceedings of the National Academy of Sciences. By modeling interactions between drugs and biologic targets, we were able to significantly reduce reliance on combined synergy data, says Wengong Jin SM `18, a postdoc at the Broad Institute of MIT and Harvard who recently completed his doctoral work at CSAIL, and who is lead author of the new research article. In contrast to previous approaches that used target-drug interactions as fixed descriptors, our method learns to predict drug-target interactions from molecular structure.

This is advantageous because most compounds have incomplete information about drug interactions. The use of multiple drugs to maximize potency while reducing side effects is almost ubiquitous for the cancers and cardiovascular diseases mentioned above, including a number of other diseases such as tuberculosis, leprosy and malaria.

The use of specialized drug cocktails can, very importantly, reduce the threat of severe and sometimes public resistance (think methicillin-resistant Staphylococcus aureus known as “MRSA”), because many drug-resistant mutations are mutually exclusive.

It is much more difficult for a virus to develop two mutations at the same time and then become resistant to the two drugs in combination therapy.

Importantly, this model is not limited to just one strain of SARSCoV2, but can also be used for the increasingly infectious Delta variant or other worrisome variants that may emerge. To extend the efficacy of the model to this strain, only further data on the drug combination synergies for the relevant mutations are needed. In addition, the team applied their own approach to HIV and pancreatic cancer.

To further refine their biological modeling, the team plans to include additional information such as protein-protein interactions and gene regulatory networks. Another direction for future work they are exploring is something called “active learning”. Many drug combination models are oriented to a particular chemical space because of their limited size, so there is high uncertainty in prediction.

This project is supported by Abdul Latif Jameel Clinic for Machine Learning in Health Care; Defense Threat Reduction Agency; the Patrick J. McGovern Foundation; the DARPA Accelerated Molecular Discovery program; and part of the Intramural/Extramural Research Program of the National Center for the Advancement of the Science of Translation within the National Institutes of Health.