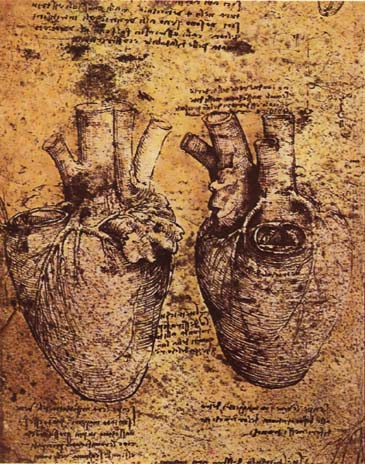 One particular feature of the human heart has had scientists scratching their heads ever since renaissance artist Leonardo da Vinci first began sketching it around 500 years ago.

The intricate mesh-like network of fibers that line the inner surface of the heart, known as ‘trabeculae,’ have long fascinated artists and scientists alike but they have never fully understood their purpose.

Now, thanks to artificial intelligence (AI), researchers have been able to show for the first time the crucial role that the minuscule muscles play in the heart: they enhance the efficiency of blood flow through the organ.

According to Declan O’Regan, a clinical scientist at the Medical Research Council (MRC) London Institute of Medical Sciences, this discovery could be used to help combat and find new treatments for heart disease, one of the leading causes of death worldwide.

“If you look at the inside of the heart, it’s not a smooth surface,” says O’Regan, who led the multidisciplinary study from the MRC’s laboratories at Imperial College London. “It’s covered in this complex network of muscle fibers.”

These are what are known today as trabeculae.

Da Vinci, fascinated by the anatomy of the human body and the heart, was one of the first Europeans to closely analyze the muscles and attempt to make sense of them through illustration:

“He looked at these branching fibers inside the heart, what they were for, and he realized that they had a really high surface area,” says O’Regan:

“At the time, he thought that they helped warm the blood as it flowed through the heart. But their real importance hasn’t really been recognized until now.”

O’Regan’s team was able to discover the true purpose of the heart strands by employing AI to analyze 25,000 MRI heart scans taken from the UK Biobank study, a health resource for medical researchers.

The findings illustrated how the trabeculae formed a repeating geometric pattern known as a fractal, which can be seen in many other organic structures from trees to snowflakes.

Measuring the complexity of the fractal patterns enabled the scientists to compare this information to the genetic makeup of each of the 25,000 patients. This meant they could see how different regions of DNA affected the patterns in these muscle fibers and their development.

“We were able to identify six genes that seem to be linked to the branching patterns of muscles in the heart,” says the doctor:

“That allowed us to begin to understand how genetics are important in the development of these muscle fibers in the heart and how, in turn, those fibers are important for maintaining the healthy function of the human heart.”

Despite Da Vinci broaching the topic half a millennium ago, technological limits meant that scientists were unable to confirm any guesses about the function of trabeculae for a long time.

“It’s really only until recently where we’ve had MRI scans that are able to show these really quite delicate fibers in enough detail, coupled with the machine learning analysis in really large populations,” says O’Regan.

He points out the difficulty of analyzing some 25,000 samples by hand, whereas computer vision techniques made processing the huge number of scans much easier.

“None of that would have been possible five or ten years ago,” he adds.

In the future, O’Regan says the research could be used to identify people who may be at risk of developing heart disease at an early stage:

“Perhaps their genes, perhaps a certain pattern of these fibers inside the heart, carry a particular risk of developing heart failure,” says the medical researcher.

“So we think that’s going to be an important next step to be able to identify those at risk of heart failure and who may need more intensive treatment.”

The research could even be used to improve the understanding of how the brain develops.

O’Regan says the way that nerve cells branch out in the brain also have the fractal patterns seen in the heart, and therefore the effect of certain genes could be important to brain development.

“We know that there are diseases that have this sort of link between brain development and heart development,” says the scientist: “so this could be an intriguing link between the same genes that control branching patterns in muscle cells and the nerve cells.”

However, the finding has also left many new unanswered questions: “We don’t quite know exactly how these muscle fibers improve the performance of the heart,” says O’Regan:

“So we’re going to do a number of studies looking at the way the blood flows into and out of the heart to be able to figure that out.”

For Ewan Birney, who also collaborated on the study: “Our findings answer very old questions in basic human biology. As large-scale genetic analysis and artificial intelligence progress, we’re rebooting our understanding of physiology to an unprecedented scale.”

This research is building on the work begun by Da Vinci’s bringing us one step closer to understanding the mystery of the human heart.