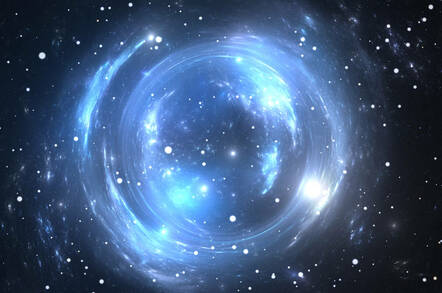 Ah yes, maybe generative adversarial models can be useful after all

Spinning up dark matter simulations is computationally expensive so a team of cosmologists are turning to AI models instead.

Generative adversarial networks or GANs are good at learning patterns from data and reproducing them in new samples. In this case, the team led by researchers from the Lawrence Berkeley National Laboratory used weak gravitational lensing maps as input to simulate more of the same images as output.

They named the model CosmoGAN and have published a paper in Computational Astrophysics and Cosmology earlier this month. Gravitational lensing provides opportunities for scientists to study the effects of dark matter in the universe. As light rays from distant galaxies reach Earth, they pass through the gravitational field of dark matter and are bent creating a lensing effect.

“A convergence map is effectively a 2D map of the gravitational lensing that we see in the sky along the line of sight,” explained Deborah Bard, co-author of the paper and a group lead for the Data Science Engage Group at Lawrence Berkeley National Laboratory.

“If you have a peak in a convergence map that corresponds to a peak in a large amount of matter along the line of sight, that means there is a huge amount of dark matter in that direction.”

Simulating these kind of maps is expensive since it requires heavy amounts of computing power to model realistic data points. CosmoGAN provides a cheaper alternative. The researchers trained CosmoGAN on 800 weak gravitational lensing convergence maps taken from previous simulations by other cosmologists to generate 1,000 new ones.

The GAN samples were similar to the maps that were created from numerical modelling. “We were looking for two things: to be accurate and to be fast,” said Zaria Lukic, a research scientist in the Computational Cosmology Center at Berkeley Lab. “GANs offer hope of being nearly as accurate compared to full physics simulations.”

At the moment the researchers are using them for 2D simulations, but hope to extrapolate them to 3D maps in the future. GANs are notoriously difficult to train, however, and the researchers hope to be able to create new virtual universes with properties they can control.

“The idea of doing controllable GANs is essentially the Holy Grail of the whole problem that we are working on: to be able to truly emulate the physical simulators we need to build surrogate models based on controllable GANs,” said Mustafa Mustafa, coauthor of the paper and a machine learning engineer at the National Energy Research Scientific Computing Center at Berkeley Lab.

“Right now we are trying to understand how to stabilize the training dynamics, given all the advances in the field that have happened in the last couple of years. Stabilizing the training is extremely important to actually be able to do what we want to do next.” ®