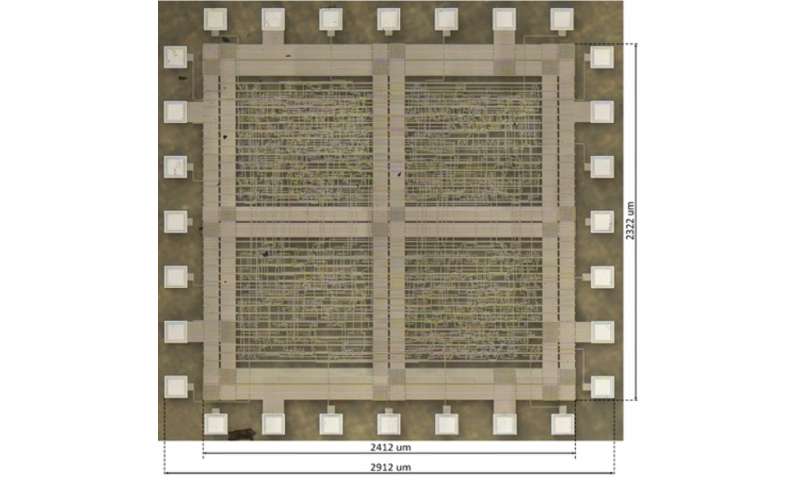 Flexible chips can be used to fabricate devices that are low-cost, as well as extremely thin, bendable, and comfortable to wear. While their characteristics could make them more suitable than conventional electronics fabricated on silicon wafers for certain applications, so far not all these chips have achieved desirable performances.

Researchers at Arm and PragmatIC have recently used low-cost flexible chips to fabricate a machine learning (ML) processing engine, which could be used to build a wide range of smart devices with advanced data processing capabilities. Their paper, published in Nature Electronics, specifically demonstrates the use of their engine for applications that involve recognizing smells or odors.

“Arm Research has a close R&D collaboration with PragmatIC, which has low-cost flexible IC fabrication technology based on metal-oxide thin-film transistors (TFTs),” Emre Ozer, one of the researchers who carried out the study, told TechXplore. “This technology has great potential for the the fabrication of processing engines on low-cost flexible substrates, which could enable billions of objects to become ‘smarter’ while costing in the range of cents rather than dollars.”

The ML processing engine developed by Ozer and his colleagues can be directly attached to sensors that detect chemical information associated with smells, known as “electronic noses” (e-noses). It then analyzes this information and tries to determine what odor the sensor picked up.

The team at Arm and PragmatIC who worked on the recent project closely collaborated with researchers at the University of Manchester who are specialized in the development of flexible e-nose sensors based on low-cost plastic substrates. The new hardwired ML engine is the result of this collaboration.

“Our engine implements an ML algorithm called ‘Univariate Bayes feature voting classifier’ that we also developed,” Ozer said. “The processing engine is hardwired, because the learned ML parameters after the training phase are fixed (i.e. do not change over the device’s lifetime). It consists of around 1000 gates, which is a very resource efficient design.”

Although the fact that the engine’s ML parameters are fixed and cannot be programmed might appear disadvantageous, the current target market for hardwired ML engines is that of fast moving consumer goods (FMCGs), which rarely need reprogramming. In fact, the priorities for companies producing FMCGs are to ensure that goods can be produced quickly, in high volumes, and at low costs, as they will also be consumed quickly.

The engine could, for instance, be integrated into plastic wrappings to process the odors of packaged foods. Packaged foods tend to expire pretty quickly and have a short shelf life, thus the package and the flexible electronic components in it would be thrown away as soon as customers consume the products. As a result, the ML engine would have a short lifetime and would not need to be reprogrammed.

“General-purpose or programmable processors were fabricated on flexible substrates in as early as 2004,” Ozer said. “These flexible processors were developed using low-temperature poly-silicon (LTPS) TFT technology, which has a high manufacturing cost. Thus, this technology was not suitable to enable ultra-low-cost electronics. An arithmetic logic unit was developed using metal-oxide TFTs on a flexible substrate by IMEC in 2014, but this was a proof-of-concept prototype with limited computational capabilities.”

The engine developed by Ozer and his colleagues features more—and more advanced—capabilities than most programmable and flexible processors fabricated in the past. In fact, it is the most complex flexible integrated circuit (IC) ever built using metal oxide TFTs. Although the engine is comprised of approximately 1,000 gates, its gate density is approximately 20–45 times higher than that of other existing digital ICs based on metal-oxide TFT technology.

When developing flexible electronics, different electronic components (e.g. sensors, energy harvesters, processors, etc.) are generally fabricated individually and then combined into a single device. Integrating flexible components into a single system, however, has so far proved to be far more difficult than combining conventional electronic components. The researchers now plan to continue testing the performance of their engine when it is integrated with other components, such as e-nose sensors and digital interfaces.

“System integration in this area of research is not as mature as it is in conventional electronics,” Ozer said. “Looking ahead, Arm Research and PragmatIC have thus already started working with the University of Manchester to integrate the flexible e-nose sensors into a single flexible system, including the flexible sensor readout interface and ML engine.”

This article has been published from the source link without modifications to the text. Only the headline has been changed.
Source link
Facebook
Twitter
Pinterest
WhatsApp
Linkedin
ReddIt
Email
Tumblr
Telegram
Mix
VK
Previous article
Typical Setups of Fabric CA Server
Next article
Machines learning at speed of light