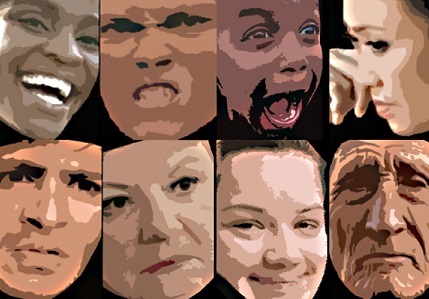 In 1872, Darwin published The Expression of the Emotions in Man and Animals in which he argued that all humans and even animals show emotion through remarkably similar behaviors. At the time, Darwin didn’t have YouTube or machine learning to test that theory. Now, nearly 150 years later, researchers at UC Berkeley and Google do have that technology—and they used it to show, perhaps unsurprisingly, that the father of modern biology was right all along.

“This is the first worldwide analysis of how facial expressions are used in everyday life, and it shows us that universal human emotional expressions are a lot richer and more complex than many scientists previously assumed,” said lead study author Alan Cowen, a researcher at both UC Berkeley and Google, who helped develop the deep neural network algorithm.

In their study, published in Nature, the researchers first used Cowen’s machine learning algorithm to log facial expressions shown in the 6 million videos, which included events such as fireworks, weddings, protests, sporting events, musical concerts and more. They then used the algorithm to track instances of 16 facial expressions one tends to associate with amusement, anger, awe, concentration, confusion, contempt, contentment, desire, disappointment, doubt, elation, interest, pain, sadness, surprise and triumph. Finally, correlating the facial expressions with the scenarios in which they were made revealed remarkable similarities and universality across all geographic and cultural borders.

“We found that rich nuances in facial behavior, including subtle expressions, are used in similar social situations around the world,” Cowen said.

Despite the human face having 43 muscles to work with to convey certain feelings, study results indicated people from different cultures share about 70% of facial expressions.

“This supports Darwin’s theory that expressing emotion in our faces is universal among humans,” said study co-lead author Dacher Keltner, a UC Berkeley psychology professor. “The physical display of our emotions may define who we are as a species, enhancing our communication and cooperation skills and ensuring our survival.”

The video clips used in the study comprised individuals from North America, Central America, South America, Africa, Europe, the Middle East and Asia. This was an especially important parameter of the study, as the researchers acknowledge their results could promote cross-cultural empathy at a time when nativism and populism are on the rise.

Another potential application of the research is helping adults and children who have trouble reading emotions—such as those with autism—recognize the faces humans commonly make to convey specific feelings.